I’m in the Business of Changing Thought

About 25 years ago, my life changed when I happened upon Harvey, a black and white film released in 1950 starring Jimmy Stewart.

Stewart plays Elwood P. Dowd, a wealthy, eccentric, never-married middle-aged man, who lives with his Aunt Veta Louise Simmons and her daughter Myrtal May. First of all, aren’t those great names? When our son Charlie came along, I wanted to name him Elwood, but my wife Julie would have no part of it. Fortunately, he ended up a lot like Elwood, in spite of not sharing his name.

I won’t include any spoilers here––just enough of the plot to hook you and make my point. As you watch Harvey, it becomes clear that everyone in Elwood’s life thought him peculiar, if not insane. But as I watched, I also discovered Elwood had found the secret to a life of bliss. He spends the entire movie trying to share this secret with everyone he encounters, but few are willing to listen––and those who do and see what Elwood sees are considered a bit nutty by the non-seers.

As I followed Elwood throughout his days, I kept saying to myself, “I want to be that guy––to see the world he does.” I also knew that if I saw like Elwood sees, most everyone else would think I am just as loopy.

Elwood never argued with anyone, even if they were itching for a fight. He was always kind and friendly, even in the face of rudeness or disdain. He welcomed every person he came into contact with into his home and his life, even if they had no desire to enter either.

My favorite Elwood scene unfolds in a psychiatrist’s office. Dr. Chumbly, the shrink, attempts to convince Elwood that the latter is not smart enough to be out in the world and that instead, he should stay at his “rest home.”

When one of Dr. Chumbly’s staff psychiatrists offers Elwood a new serum that would “shock him back to reality,” Elwood replies, “Well, I’ve wrestled with reality for 35 years, Doctor, and I’m happy to state I finally won out over it.”

In a beautiful moment, Dr. Chumbly ultimately comes to see what Elwood has been attempting to show him. The doctor declares, “Fly specks! Fly specks! I’ve been spending my whole life among fly specks while miracles have been leaning on lampposts at 18th and Fairfax.”

Webster’s Dictionary defines the word wasteland as “a term used to describe a period of history, phase of existence, locality, or society that is spiritually and intellectually barren.” When I see how most of my fellow citizens choose to spend their time, I see society of “wastelanders.”

I sit among my family, friends, and associates and observe them day after day, worrying, arguing, even fighting about all forms of fly specks: Trump, Hillary, Bernie, Democrats, Republicans, race, gender, orientation, religion––the list is endless. They wrestle with these “issues” as if they are real; as if they exist like the air, water, and rocks; as though they are things that can somehow be fixed.

I remember when President Obama was elected. I heard people all over Austin say, “I hope he solves the race problem”; as if out there, a thing called the race problem sits, waiting to be fixed.

When I’d reply, “You can hope all you want, but no one can fix a problem that does not exist,” I’d receive a barrage of insults and accusations––I’m sure you can guess what they were.

Their yelling and condemnation of me does not change the fact that despite centuries of fretting and fighting, we’ve failed to fix any of these problems.

Which brings us back to Harvey. Watching Elwood, I learned that there is no reality other than what we choose. The fly specks I’ve listed above are not real. They’re thoughts. They exist only in the minds of men and women and can morph or even disappear entirely.

We experience these issues because we choose to think we way we do. That means the solution is simple: change the way we think, and our reality will change. 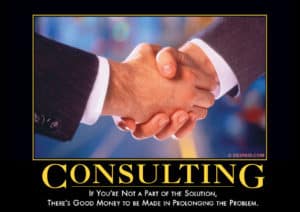 A small poster created by Austin firm Despair Inc hangs above my computer monitor on my office wall. The image captures two hands mid shake, both jutting out of dark suits and crisp white cuffs to clasp one another. Below the picture, these words are written:

If you’re not part of the solution, there’s good money to be made in prolonging the problem.

Pictured above: Jimmy Stewart as the beloved Elwood P. Dowd in Harvey.