Lead from the Future

Over the last two weeks on the All-In™ Blog, we’ve revisited my very first supervisor training class, held about 35 years ago. A student in a training session I was leading prompted the trip down memory lane: As I introduced her and the other participants to the unique suite of realizations, faculties, and skills that distinguish an All-In Leader, she asked me which are the most essential.

There are three core concepts that are most essential, and in the first two posts of our series––”Lemmings in the Conference Room” and “See the Faces in Every Decision­­“––we explored two of them in detail:

In this final post in the series, I will discuss the third foundational element––a skill that many find difficult to grasp, let alone master: leading from the future.

Leading from the future is much more than just clever phrasing. It’s a unique and powerful orientation that separates All-In Leaders from the pack. Most leaders lead into the future––that means that based on their experience and current circumstances, they make predictions of what’s possible. These predictions become the organization’s goals or “key performance indicators.” Plans are developed and executed to meet these objectives, and progress is measured along the way.

Leading into the future is what I call good management. It’s an extremely valuable skill that any leader worth her salt must possess. But it has its limits.

“Basing one’s future plans on what exists now simply generates plans for more of the same. The difficulty in planning forward from the present is that it invisibly locks in the very constraints that produced today’s frustrations.”

In my new book Heretics to Heroes, I define leading from the future by sharing an conversation I had about the concept with a senior executive:

Heretics to Heroes – Chapter 26: The Vision

“Let’s spend the next hour exploring the future you’ll be leading from.”

“Leading from?” Michael asked. “I’m not sure what you mean by that.”

“Good question. Up to now, I’ve been speaking in the way most people think of leading— leading forward, into the future. But actually, the best leaders don’t lead into the future, they lead from it.”

“I’m still not following. I don’t see the difference between the two.”

“Let me see if I can distinguish the two for you. Leading into the future is not really leading; it’s just good management. It involves developing a strategy and plan to get from the present to the future and then executing that plan. In this way, the future is predictable; it’s known and doable. All that’s required to bring a predictable future into being is to follow the plan from A to B. This type of so-called leading is done every day in business and elsewhere. Am I making sense so far?”

“Good,” I said. “Don’t hesitate to stop me if I lose you because this next part can be more difficult to grasp. Now, what I call leading is very different than good management. It’s not better, just different. We need good management as much as good leadership.

“When leading, there’s no strategy or plan, at least not until well along in the process. The future is not predictable—in fact, that’s the very essence of leadership. Leaders lead to where no one has gone before, into a future that doesn’t exist and would never exist if not for the leader’s vision and leadership.”

“I’m with you so far,” Michael said. “But why leading from the future?”

“Because that’s the place from which leaders lead. They stand in that future and look back to others and say, ‘Hey, join me over here. Follow me, and together we’ll create a new and better future.’

“I’m proposing that’s what you do at your summit,” I added.

“You alone will be standing in the future, the future you’ll spend the next few weeks articulating, and you’ll look back at the invitees and say, ‘Join me over here in this future, and we’ll create it together.’ And then they’ll spend much of the summit considering your invitation.” 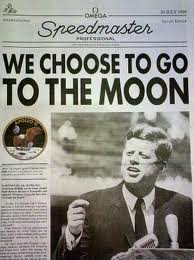 Leading from the future is about declaring a new, different, challenging, or better tomorrow. President Kennedy led from the future when on September 12,1962, he stood alone in front of 35,000 people and proclaimed:

“We choose to go to the Moon in this decade…because that goal will serve to organize and measure the best of our energies and skills, because that challenge is one that we are willing to accept, one we are unwilling to postpone, and one we intend to win.”

A declared future is not predicted, but rather envisioned and articulated by the leader in such a powerful way that it attracts followers who say, “I want to be part of that. In fact, I want so much to be part of it, I’m willing to change and give more than I normally do to make it happen.”

Through this process of enrolling followers, the leader causes people to no longer be constrained by present circumstances or what’s presently possible, which frees them up to achieve the impossible.

Galileo, Lincoln, Anthony, Kennedy, Gandhi, King, Mothers Against Drunk Driving, Mandela, Gates, and Jobs—they all led from the future. In doing so, each created better realities that have become so accepted, it’s often easy to forget that these new ways of being, thinking, and acting were once starry-eyed visions deemed futile.

From what impossible, boundary-shattering, bright future will you lead?

(Pictured above: Steve Jobs made history by leading from the future.)