Lead Through People, Not Systems

Life constantly offers us lessons if we’re open and willing to pay attention. One of my earliest realizations that people are the key to better performance hit me not while I was managing a team, studying a theory, or coaching a CEO.

I had that epiphany while I was shopping in an Old Navy store with my wife Julie and our son Charlie, who was just five years old.

We were buying Charlie some of his very first school clothes, and he was taking in the entire experience. When we got in line to pay, Charlie eyed the shirts and shorts we’d selected that would work in a classroom and on a scorched Texas playground where the heat wouldn’t let up for several more months. He spotted the security tags that the clerk began to remove, and he asked me, “What’s all that stuff for, Dad?”

As dads are prone to do, I launched into a detailed explanation of the entire security system, delving into garment tabs, the radar towers guarding the store entrance, system alarms, hidden cameras, and the plain-clothed security personnel. 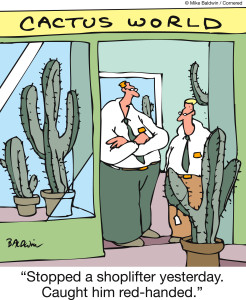 I was pretty pleased with myself. I finished and looked down at Charlie, expecting him to be full of admiration for his old man’s knowledge. Instead, he stood there, looking puzzled, and asked, “But why don’t they just teach people not to steal?”

Why don’t they just teach people? Charlie’s innocent wisdom hit me hard. My mind began racing: all of the time, money, and effort governments and organizations spend on elaborate systems designed to control human behavior. “What if it is all a waste?” I thought to myself. “What if Charlie’s right? What if it’s as simple as teaching people not to steal?”

That was a watershed moment for me­­––prompted by a little boy who hadn’t even started school yet. From then on, more and more questions rolled in:

What would it mean to a company if they could replace most of their systems, processes, rules, and policies with leaders capable of earning followers who believe what the company believes and behave in corresponding ways?

What kind of leader can affect people and their social groups so that they’re willing to act in the best interest of themselves, one another, and the entire enterprise?

All-In™ Leaders are able to enroll people in a vision so wholly that the vision becomes something followers are willing to alter their thinking and behavior to realize. If the vision includes “We don’t steal,” then the leader’s followers do not steal. If the vision includes “We always do what we say we do,” the plan is always followed––or on the rare occasion when it isn’t, someone notices and intervenes to ensure deviation is not normalized.

So how do these leaders do it? Success is rooted in understanding what I call the Four Fields of Performance.

While there are four fields, the peak performance I’m talking about is achieved primarily through just two of them: self and social. That secret is the biggest barrier for so many leaders: They consider working in the areas of self and social too “touchy-feely” or “soft.” That’s a shame. Self and social are actually the easiest and most sustainable areas from which to create extraordinary performance.

Leaders who can’t embrace the self and social are left working exclusively in systems and behavior, the two least effective and sustainable of the Four Fields. Ultimately, these leaders will lose, as over and over again, their people choose their social group’s values and goals instead of their company’s, and by doing so, fail to reconcile the two.

Take a moment to think about it: When the company taps into the social, an individual is not forced to choose between their organization and their social group because the two are the same.

Leaders, many of you reading this may not have not worked in the self and social fields before. You may feel a little lost. Don’t. Here is how to get started:

The Self Field: Getting Started

In 1952, Roger Bannister declared publicly that he would be the first runner to run a mile in less than four minutes. At the time, what Bannister claimed he’d do was considered impossible by every expert. Medical journals asserted that the human body would break apart at such a speed.

What began as Bannister changing how he viewed himself and what he held possible had a massive ripple effect: His declaration and success transformed the selves of thousands of other runners, who began to believe running that fast was possible. Consequently, 46 days later, a second runner broke the four-minute-mile barrier. Not long thereafter, it became common for the speed to be reached in high school track meets.

If you think something is impossible for you to accomplish, it is. We can never outperform our self-image.

Belief is contagious. What is impossible today, but if it could be done, would fundamentally transform your business and industry? Is it operating without harming or injuring anyone or anything—ever? Delivering every project ahead of schedule, under budget, with great quality? Getting your products to market in half the time it takes your competitors? What can you hold possible and publicly declare that would transform your organization?

People remember who came first. We appreciate those with the vision and courage to declare a seemingly impossible future. We remember Bannister’s name––not the second guy to break the barrier. Don’t wait for someone else to proclaim and achieve.

The Social Field: Getting Started

In Texas, we have a famous public service declaration that was incredibly successful: “Don’t Mess with Texas.” Before the campaign debuted almost 30 years ago, Texans were more than okay with littering along roads and highways. The signs that labeled them “litter bugs” if they tossed their empty Coke bottles and paper bags out the windows of their cars had little impact on how they viewed themselves or their actions.

Then, the Don’t Mess with Texas campaign made littering analogous to messing with Texas. Texas is personal––Texas is us. Suddenly, trashing Texas became synonymous with trashing each other and the beautiful spaces that belong to us all. Almost overnight, littering became socially unacceptable to Texans and to this day, real Texans don’t litter.

In a sense, as Charlie proposed, the Don’t Mess with Texas campaign simply taught Texans not to litter.

Social connections and accountability––another topic we’ve discussed in depth on the All-In Blog before––is a group phenomenon, and therefore, forged in groups. The goal is for each individual to feel a sense membership and community. The stronger that sense is, the more likely people are to care about each other and one another’s performance, and self-regulate their actions.

Get your people together to account for and discuss performance––honestly––at least once a month. Let them know where everything that affects their future stands, even performance for which they are not accountable. Explain all variances, both positive and negative. Acknowledge the positives and discuss the negatives. Nothing will have an impact on social accountability and consequently, performance, faster than this simple step.

Have your group negotiate social agreements that address who we are, what we stand for, what we value, our vision, our missions, and our expectations of each other. Write it all down. Put it up where everyone can see it. Refer to it often in different venues and in different ways.

The Self and Social Challenge

If you’re serious about creating performance you once believed impossible, place a prohibition on systems and behavior programs in your workplace. Begin studying human psychology and sociology. Force yourself and your people to start working in the self and social fields. Begin using that part of ourselves that has laid dormant in business for so long.

Reach out to me with any questions, and get started. Together, let’s go All-In.