Look Here, Not There: Maybe Your Safety Goal Shouldn’t be “Injury-Free,” Part IV

Over the past three weeks, I’ve been sharing conversations I had with Bob, a well-meaning operations manager in a large chemical company where we both worked. It all began when I argued that those of us in senior management only really knew about 10% of the injuries and incidents that occurred in our plants. Bob and I dug into why our people weren’t talking, and the wrong focus that we––as leaders––had cultivated. Misguided, accusatory, and automatic investigations were doing more than just not helping. They were hurting us.

Bob wanted to know where we should channel our efforts instead. And that’s where we left off last week.

“Are you ready to continue where we left off?” I asked Bob, back in his office a week after we’d begun to drill down into the gaping holes in our safety approach.

“So, when we stopped, I’d just suggested that there are some problems with the current safety paradigm we––and most other companies––use.”

“Yes you did,” Bob replied. “You also said you have a paradigm that’s much better.”

“If you mean one that will get us better safety performance, then yes, I do,” I said. “But first, I want to make sure you understand the two basic issues with the current framework that are limiting its effectiveness.”

“The two limitations are one, it focuses on incidents and injuries; and two, it’s preventative in orientation,” I explained. “Here’s why those two problems in particular prompted me to look for another way.” 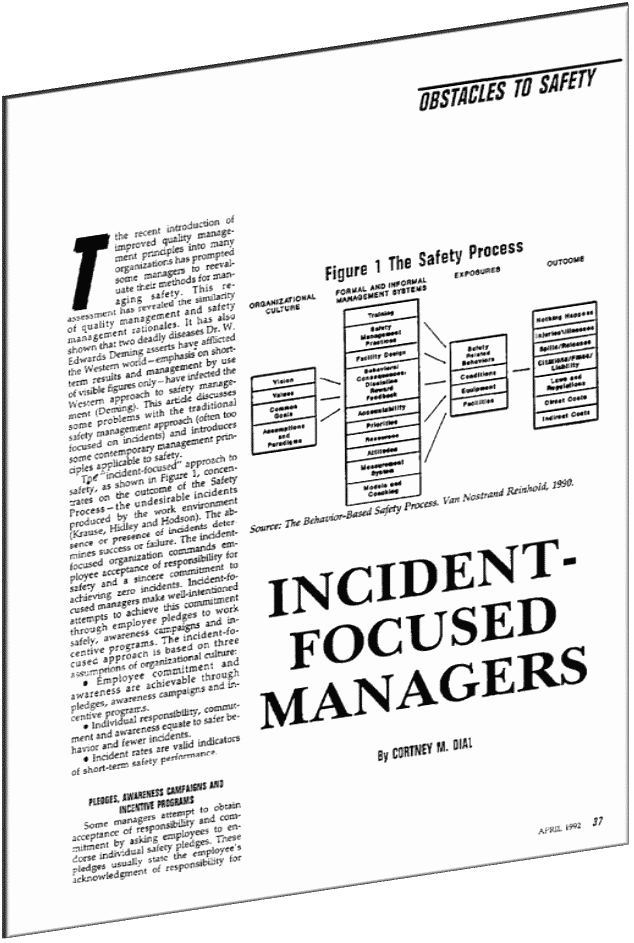 I handed Bob a copy of an article entitled “Incident-Focused Managers: Obstacles to Safety” that I’d written in 1992 that was published in Professional Safety Magazine. “The magazine got a lot of feedback on that article, and about 90% of it was very negative,” I said. “I took a lot of heat for what I asserted even within the safety community of my own company. But I had a boss who reminded me that Einstein once said, ‘If at first the idea is not absurd, then there is no hope for it.’ So I was encouraged. I knew I had to continue searching for a new paradigm.

“In that article, and ever since then, I have done my best to help others understand that focusing on incidents and injuries is detrimental to safety performance. Here are a few reasons why.”

“Incident-focused” directs our attention and intention to incidents

The summer before my senior year in college, I stayed at school to complete two elective classes necessary to graduate. One was about emergency driving skills. One session, the instructor took us out to the “skid pad,” an asphalt pad about 100 square-yards large with a six-inch curb. A one-inch layer of water covered the surface.

Our instructor led us through a number of exercises, all intended to teach us how to re-establish control of a vehicle while in the middle of a harrowing skid. Needless to say, this course was the most fun of any I took during college.

One of the exercises involved driving at high speed directly toward a plastic palm tree. When the car was about 40 yards from the tree, the instructor would yell, “Brake!” and I would slam on the brakes, sending the car into to a skid headed right for the tree. We were told to keep pressure on the brakes until the instructor yelled, “Now!” When he did, we would try to avoid hitting the tree and regain control of the vehicle.

After three attempts, everyone in the class had skidded right into the palm tree, every single try. That’s when the instructor sat us down to teach us the power of intention.

“Stop trying to avoid going where you don’t want to go,” he told us. “Stop trying not to hit the tree. Instead, forget about the tree. Focus your eyes and every bit of your intention in the direction you want the car to go.”

I listened. Then, it was my turn. In addition to not hitting the tree, the car went basically where I wanted it to go. I was amazed.

“As you go through life, whenever there is something in your path that has you skidding out of control, remember what you learned today.”

“That’s a great story, but how is it applicable here?” Bob asked.

Bob stared at me, befuddled. Paradigms prevent us from seeing other ways of doing and being. We become entrenched and essentially, blind.

“We are continually putting accident reports in front of people and saying, ‘See what he did wrong? Now don’t you do it that way,’” I said to Bob, determined to make him see.

“But doesn’t it make sense to show people how they can get hurt?” Bob asked.

“Then what do we show people?” Bob replied.

Our family owns a baseball player development business in Austin. “When a player comes into our facility interested in improving his hitting performance, would it make sense for us to show her hitters that hit the wrong way, or hitters who hit the right way?” I asked him.

“Of course you do,” I said. “We show the player what good looks like by showing her video of how the very best hitters hit. And then we encourage her to place all of her attention and intention toward hitting the way they do.

“In the new safety paradigm, we don’t show people how they can get hurt,” I continued. “We show them what working safe looks like. That may sound like semantics, but it’s not. It’s one of the things that makes the difference between typical safety performance and unprecedented safety performance.

“Showing our employees how one of them has been injured is about as useful as showing a baseball team how one of them struck out,” I said. “Bob, I realize that in the current paradigm, what I’m saying sounds ludicrous. It is when you’re in that paradigm. That’s how paradigms work––they give us the rules for how the game is played, and define what success is.”

In the traditional safety paradigm, the rules dictate that we focus on preventing incident and injuries. The winner is whoever has the least of them. “But if you could stand in this new paradigm instead, what I’m saying would make sense,” I said. “I want to be clear: I choose this new paradigm because it gets me better results.”

“Incident-focused” sets us up for “the big one”

In the current paradigm, virtually all the data we have is information we have extracted by investigating sudden events––injuries and incidents. “That’s not very useful data,” I said. “In fact, it sets us up for ‘the big one’ by blinding us to subtle changes that are occurring. It causes us to direct our safety efforts to the wrong places and to ignore much more serious issues that have catastrophic potential.”

“Give me an example of what you mean,” Bob said.

In the late 90s, I was sent to Texas by a vice president of manufacturing in response to a major explosion in one of our plants. The unit was critical to the corporation’s financial success. Fortunately, no one was killed or seriously injured when the unit when up. Just like all of the other employees in our company, Bob knew the event well. Industry analysts later estimated the explosion cost thousands of employees their jobs.

The VP instructed me to “find out what the hell the problem is in Texas.” I spent several days at the site interviewing people and sitting in on meetings and presentations by plant personnel and consultants about the event. During one of those presentations and an interview later on, I discovered the problem––and it wasn’t in Texas.

I was sitting in the front row, and on either side of me sat plant operators who happened to work in the unit that had exploded. We listened as a consulting team who’d analyzed the accident pointed out over a dozen different process shortcuts and bypasses approved by management and deviations made by operators that culminated to create the conditions that led to the explosion. As I sat there dumbfounded trying to understand how all of this could have gone on without leadership recognizing they were creating a climate for catastrophe, the operator sitting on my left leaned across me to snicker to the operator on my right, “Yeah, but we’ve got one hell of a hand-safety committee.”

I told Bob that when I went back to the office, the VP sat me down and asked what I’d learned. “Well, I learned what the problem is. It’s not in Texas. In fact, I’m talking to him right now.”

Before the VP could respond, I told him about my experience with the two operators. “After the presentation, I pulled them aside and asked what they meant by the ‘hand-safety committee’ comment,” I said. “They told me that the previous year, the plant had had a rash of minor hand injuries and in response, their VP had issues an edict that all his plants had to have a hand-safety committee.”

“One of the operators made the point when he said to me, ‘While we’re bypassing safety systems and delaying preventative maintenance to keep the unit running, our bosses are worried about cut fingers. That tells us they’re clueless about what’s really going on in this plant.’”

Then I shared something else with the VP. I asked the operators, “If you knew all of this was going on, why didn’t you tell someone? Why didn’t you exercise the authority we’ve given you and shut down the unit until it was fit to operate?”

They looked at me like I was from a different planet. “Mr. Dial,” one of them said. “When this unit is down, it costs the company $1 million a day. I don’t know how much money you make, but they don’t pay me enough to make those kinds of decisions.”

“I wonder where they learned that it costs a million a day when the unit is down,” I said to the VP.

I could see that Bob was beginning to understand. “Let’s stop there,” I said. “We can take the next week to think about all of the implications here.”

Next week, I’ll share the next part of our conversation, which exposed how the traditional paradigm’s preventative orientation was limiting our safety performance. I also started to introduce the safety paradigm I wish every leader would embrace.