The last month here at the All-In Blog has been devoted to conversations I once had with Bob, a hard-working operations manager of a chemical plant that employed us both. I told Bob that those of us in senior management only knew about 10% of the incidents and injuries that actually occurred in our plants––and he disagreed vehemently. I sought out to prove that our people weren’t talking and explain why, which had everything to do with us cultivating an incorrect focus. I showed Bob that the problem with our current focus was two-pronged: 1) we were zeroing in on incidents and injuries; and 2) we had assumed a preventative posture.

Bob was eager to hear what I recommended instead, and I knew he was finally ready. I’d walked him through several truths about paradigms––especially his. I knew he had to understand the following:

Even after Bob realized these eight things, there was no guarantee he’d be able to see and embrace the new paradigm I planned to propose. That wasn’t because Bob was somehow lacking––we all find it extremely difficult to let go of our existing paradigm and see a different one clearly. We tend to view the new framework through the lens of the old one, and try to make it play by those rules, as we’ve been conditioned to do. I hoped that Bob would be able to escape that trap and examine my proposal fairly before either accepting or rejecting it.

Bob and I met in his conference room. “So today’s the day you’re finally going to share your new safety paradigm?” he asked me. 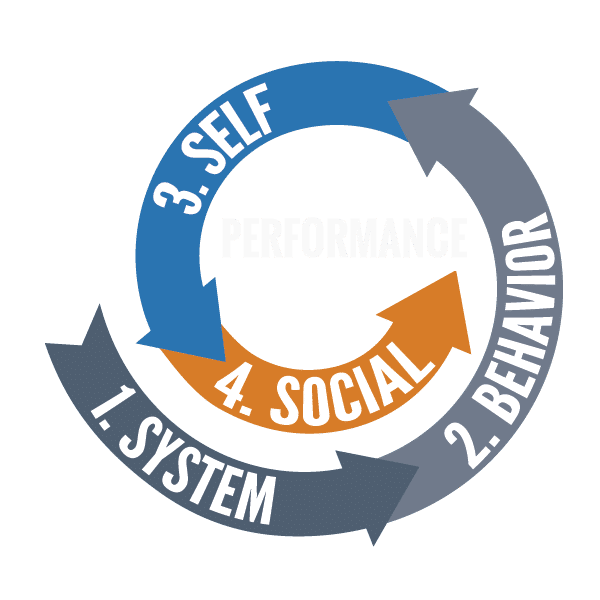 I asked Bob to imagine a square divided into four equal fields: the systems field, the behavior field, the self field, and the social field. “These are the four fields from which all performance, including safety performance, are harvested,” I said. “A century of hard work in our current safety paradigm has paid off. We are very effective in the systems and behavior fields.

“We’ve gotten just about all we can out of those two fields,” I continued. “We’ve become so good at working in them that we tend to overuse them and ignore the other two fields. Whenever there’s an accident, the automatic reaction is to write a new procedure and/or give people new behaviors to try to prevent it from happening again. So we end up piling system after system and behavior after behavior onto our people until there is no way they can know all the systems and behaviors with which we want them to comply.”

“So if more systems and behaviors aren’t part of your new paradigm, what is?” Bob asked.

“Oh, they’re an integral part of my new safety paradigm,” I said. “What is new is the self and social fields, and the role they play in support of the systems and behavior fields.”

All leaders want great safety performance, but few are aware that the actions, perceptions, and relationships that determine that performance play out in these four distinct fields. Leaders are influenced by and influencers of these four realms, which they must use and operate within to guide and inspire their people.

The self and social fields house entirely new and different forces for safety leaders to comprehend and cultivate. Ultimately, an organization’s performance will be limited by the weakest of the fields, which in our case and most others, was the self and social.

“In the new paradigm, the systems and behavior fields are not forgotten,” I emphasized. “We utilize them when appropriate, but most of our attention and time are redirected to the self and social fields.”

“So you’re proposing balancing the four, not the self and social replacing the other two?” Bob asked.

“Exactly! Only a person who has learned to operate in, fully utilize, and keep these four fields in balance has the potential to create what safety leaders have sought for decades: a professional environment where work is done without harm to anyone or anything.”

“Then how do I work in these other two fields?” Bob asked. “What would I be doing if I were to work in the self field?”

“The leader working in the self field is working to influence and inspire the selves of the people whom he leads,” I said. “When I toil in the self field, I’m affecting all the things that go on inside my people: what they think, what they believe, how they feel.”

I told Bob that in my experience, virtually everyone––including those who claim to be pursuing “injury-free” work zones––do not believe that level of performance is a genuine possibility. They don’t believe it’s actually doable or within their control, and if they’re being totally honest, they don’t have confidence it’ll happen. If they did, they wouldn’t spend sleepless nights worrying about when and where their next accident might occur. During the last several decades of working in all sorts of companies all over the world, I’ve found that whenever I ask, “Do you believe it’s possible to do what you do here and not harm anyone or anything?” the answer is always a universal “no.”

“This is a big problem, Bob,” I said. “It limits our safety performance. No one and no organization can ever outperform that which they believe is possible. If our people believe––as almost all people do––that somehow, somewhere, someone will be harmed, then we can have the best systems and behavior programs in the world, and still, somehow, somewhere, someone will be hurt.”

“I see your point,” Bob said. “We’ve got to change that perception or we’re not going to get the full potential of all the good work we’ve done in systems and behavior fields.”

“Yes,” I replied. “And that’s just one reason why I say your performance will be limited by your least developed fields, which for us, are the self and social.”

“Can you give me another example of a leader working in the self field?” Bob asked.

“Do you remember our earlier conversation about the way we measure and speak about safety, and how it tends to objectify human beings?” I said. “Remember, I said, ‘As soon as we begin speaking in numerical goals and statistics, we are talking about numbers, not people.’”

“Well, who do you think is going to produce better safety performance?” I said. “An organization whose leader and people relate to one another and themselves as objects to be directed and controlled, which is what the systems and behavior fields tend to encourage, or as sacred beings to be led and loved?”

“I guess the ones that are led and loved,” Bob replied sheepishly.

“You guess! Why do you say you guess?”

“I’m not comfortable talking about love at work,” Bob said. “I’m not sure it’s appropriate terminology for the workplace, and I’m not sure how our people would react if we began speaking in those terms.”

“Why don’t you think it’s appropriate?” I asked.

“Oh I agree––it’s not done,” I said. “But that’s not an answer to my actual question. My question was, ‘Why do you say that speaking in terms of love and sacred beings is inappropriate for the workplace?’”

“Years ago, I was coaching the project and safety managers of a large construction project,” I said. “All the steelworkers were teamsters from Philadelphia, and, like you, got uncomfortable when I would speak to them about caring for and taking care of each other. I’m not sure why. Maybe they felt it was unmanly or something.

“Then one afternoon, Cliff, a 20-year-old nephew of the crew supervisor whose brothers and cousins were also members of the crew, fell about 40 feet to his death. It was absolutely horrifying what happened to that young man’s body.

“That was shocking enough. But what was also surprising was the reaction of all those tough men upon hearing the news and seeing Cliff’s mangled form being rushed out of the plant in an ambulance. They were all sobbing, even wailing, in grief. They were hugging each other, saying how much they loved one another, and how much they loved Cliff. This went on for days, and again at Cliff’s funeral.

“After the funeral, I went to the reception at Cliff’s parents’ home. I was sitting with several of the crew members in the living room. I sat quietly as they continued to sob and cry on each other’s shoulders. Then one of them looked at me and said, ‘Cort, we should have listened to you. Instead of showing how much we care about Cliff after he died, we should have been doing it all along.’ The other men nodded.

“That experience changed me, Bob. It helped me see that if we’re ever going to have a workplace where no one gets harmed, we have to change the way we think about and relate to ourselves and each other first. We have to start seeing ourselves and our coworkers for what we are: precious beings worthy of love, care, and concern.

“And you know what? The leaders who’ve I’ve enrolled in this idea who are acting from that orientation have found that no only do they get more satisfaction out of leading, but they are capable of producing safety results that others have only dreamed about.”

Bob sat still, listening attentively. It was quiet for a moment after I finished. Finally, he spoke. “So that’s what you mean when you say ‘toiling in the self field’? You expect leaders to foster a culture where people care for and about each other as they would their loved ones.”

“Close,” I said. “I encourage leaders to foster a culture where they and their people all relate to one another as loved ones.”

“That can’t be easy,” Bob said. His doubt in his ability to lead from that place was obvious.

“It’s not only easy, it’s natural,” I said. “Human beings are wired to love and care for one another. We are our most happy and fulfilled when we do. We’ve just had that natural tendency schooled out of us, just as those teamsters had. The question is, are you going to wait for some tragic event to trigger that tendency in your people? Or are you going to learn how to evoke it through your leadership?”