Why Heresy and Heretics Matter

Heretics are time travelers. They see the future with the clarity and confidence of someone who has been there and only returned to let the rest of us know what can and should be. Most of the time, everyone else simply isn’t ready. So, the crazy ideas that are actually vivid portraits of a better future are dismissed as heresy.

A handful of history’s most heretical ideas:

The earth revolves around the sun.

Humans are related to apes.

Disease is caused by unseen organisms.

Many of those who proposed the ideas above were mocked, jailed, tortured, or even crucified.

The future heretics bring to the present can also assume the form of declarations, such as:

“I will run a mile in less than three minutes.”

“We will put a man on the moon and bring him home safely by the end of the decade.”

“Little boys and girls will one day not be concerned with the color of their skins.”

“Homosexuals should have pride.”

The heretics who made those declarations were ridiculed, stoned, fire-hosed, or assassinated.

Heretics can also come to us with ways to do something we already do but in a manner we never dreamed was possible: the printing press, the horseless carriage, the knuckle ball, the quartz timepiece, blood transfusions, electrically amplified musical instruments, aluminum cans, building implosions, satellite communications, digital recordings. Each of those adaptations met disparagement and an endless stream of reasons why they were not just impossible, but dangerous.

A world without heretics is a world with no future––a world in which time stands still.

Were it not for heretics, we’d still be living in caves, fearful of the night, defending ourselves with rocks, and sacrificing virgins to appease gods. In fact, if it weren’t for heretics, our species may not have survived at all. 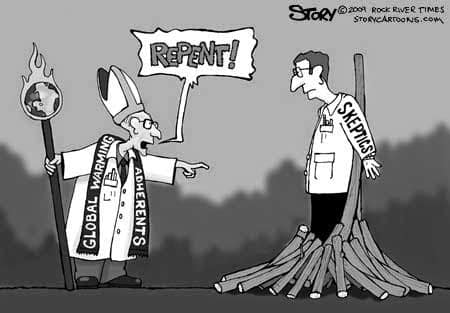 So why do we always resist and ridicule the heretic? Why is it that anyone who thinks, speaks, or behaves profoundly differently than we do is queer at best, burned at the stake at worst? And why is this sad human habit so especially prevalent today?

Why is it that if someone says or does something that deeply questions our way of thinking or doing, we become so upset that we assassinate their character and shame them into silence?

Will we ever recognize heretics as a rare and precious commodity to be heard and nurtured? What if we accepted heretics, welcomed, and even encouraged and revered them?

Why can’t we just see that our lives would suck without them?